The Los Angeles Police Department is telling residents to “not wear costly jewels as it can make them a victim.”

California is experiencing a high rise in crime rate, caused by the implementation of weak policies by the left.

Reports are pouring out of California, including incidents in which perpetrators just walk out of stores carrying stolen goods while security personnel stand by and take no action. 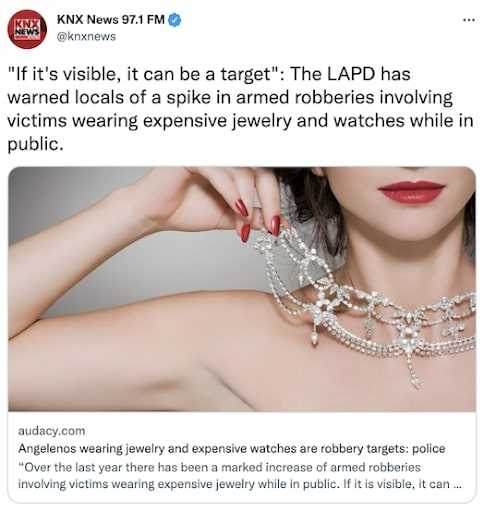 The most recent robbery took place at a Beverly Hills jewelry store with a sledgehammer, where more than $3 million in jewelry was taken in broad daylight on Tuesday. The police said that five men, who had their faces covered, broke the window and took off with the store’s jewelry.

The LAPD issued a statement following the robbery. They said that by wearing flashy and expensive jewels, a person is more likely to get targeted by robbers and thieves. Police also said there has been an increase in armed robberies that have involved victims wearing high-value jewelry items.

The owner of Luxury Jewels of Beverly Hills, Peter Sedghi, also stated that a lot of his clients are now scared to wear their jewels casually in public for fear of being robbed.

And in a state that prioritizes their woke credentials over their crime rate, police warn law-abiding citizens not to tempt thieves instead of arresting criminals.