Putin watched the mess that Joe Biden left in Afghanistan and how Biden chose weakness over strength when it came to Russia’s threats to Ukraine at every stage along the way. It’s why Putin opted to go into Ukraine today, just as he did in 2014 because of Barack Obama’s weakness. In the intervening years, he did not invade under President Donald Trump.

Moreover, even though they had the opportunity in January, Joe Biden and the Democrats battled against sanctions on Russian energy business Nord Stream 2, utilizing the filibuster rule they condemned as “Jim Crow.” However, Democrats are now attempting to blame President Trump for Putin’s strike during Biden’s tenure. They’re delusory, but they don’t have many arrows in their quiver to justify how severely Biden screwed this up.

Clinton made the bizarre argument that Republicans had “lost their spine and conscience” when it came to Putin, beginning with Trump’s rise. She called them “naive in a dangerous way” and wrongly claimed Republicans backed Putin because he was “anti-gay.” “The naiveté is difficult to comprehend. They’ve got to call it out,” Clinton stated. 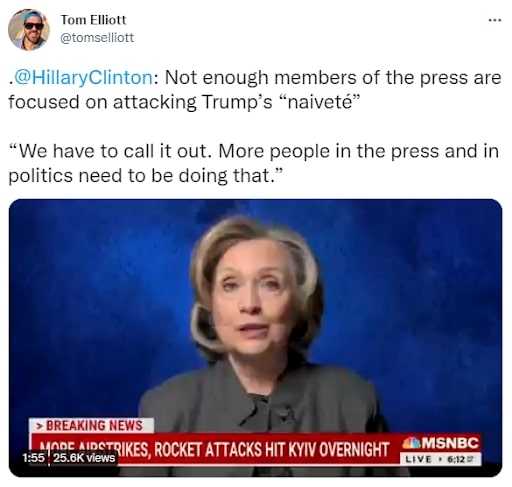 Furthermore, Biden presented Putin with 16 targets he should avoid and then passed it over to Russia. Biden provided intelligence with China, who then shared it with Russia. It’s challenging to be more naive or ignorant than that. Republicans, including Trump, have taken steps to avoid all of this, with Trump boosting NATO and threatening penalties against Russia, as well as placing Nord Stream 2 on the table.

Clinton is still living in her brain with Trump, and she can’t get over her defeat. Can people ever forget Hillary’s astounding naiveté, which she may want to remember now when she imagined she might have a “reset” with Russia? Sergey Lavrov, Russia’s foreign minister, humiliated her right there. Russia was spitting in their face even back then.