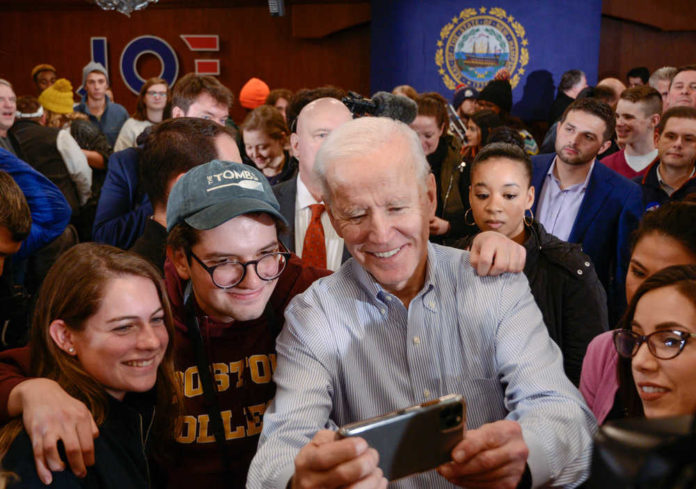 Yet another video of President Joe Biden being creepy has emerged and gone viral, as the elderly man once again gets uncomfortably close to a little girl.

Critics are roasting Biden after a video went viral on Twitter of the president whispering into a little girl’s ear.

Biden has been called out on numerous occasions for his penchant for inappropriately touching women and whispering into young girl’s ears, even by some within his own party.

In the short video shared to Twitter, the president posed for a photo with a young girl and a woman, likely the child’s mother, before he can be seen lowering his head by the girl’s cheek and whispering something inaudible. The little girl appears to flinch away from his face as it gets close to touching hers.

“Dad ran into Joe on a biking trail in Delaware and got a live sniffing video,” the Twitter user captioned the post on Sunday. The video appears to have been taken on Sunday.

The clip has gone viral, receiving more than 1.1 million views by Wednesday evening.

Dad ran into Joe on a biking trail in Delaware and got a live sniffing video lmfao pic.twitter.com/qz9KuEzN9E

Social media immediately lit up with criticism for the president.

“He can’t help himself,” said Chad Prather, podcast host at The Blaze.

“Why is he unable to stop doing this creep behavior,” asked Jake Shields.

“Not sure why people let their kids around this dude!” commented former NFL player Derek Anderson.

This is not the first time Biden has made children uncomfortable with his “creepy” actions. There are numerous photos and videos of the president sniffing and touching women and young girls inappropriately, so much that there are video compilations on YouTube of his bizarre behavior that are over ten minutes long.

Just two days before this most recent incident, conservative podcast host Jesse Kelly shared an image on social media of another time that Biden made a little girl uncomfortable, writing: “PRO TIP: This is not normal. Everyone knows it. This is how kiddie touchers act. I’ve been around a lot of old people. Never once seen one act this way. Never once.”

PRO TIP: This is not normal. Everyone knows it. This is how kiddie touchers act. I’ve been around a lot of old people. Never once seen one act this way. Never once. pic.twitter.com/TaJsBWJ4kb

In 2015, New York Magazine’s Intelligencer reported on Biden’s penchant for “creepily” cozying up to women and girls, referring to him as “the president of Awkwardly Whispering in Women’s Ears” and detailing eight incidents, some of which included children.

According to reporting from The Daily Wire back in 2020, Biden has been accused of sexual misconduct and inappropriate touching by at least eight women, including Alexandra Tara

Reade, who asserts that the president sexually assaulted her in 1993.
Reade, who served as an aide in Biden’s Senate office in the early 1990s, went public with her claim in 2020, and her allegations were later substantiated by several contemporaneous accounts, according to The Daily Wire.

“Yeah, and he went down my skirt but then up inside it, and he penetrated me with his fingers, and he was kissing me at the same time, and he was saying something to me,” Reade claimed. “He said several things. I can’t remember everything he said.”